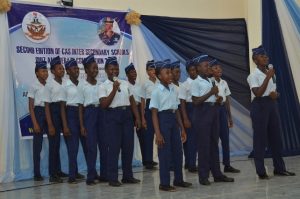 The Nigerian Air Force (NAF) conceived the idea to establish an Educational cell in the early 70s when it realized the need to provide continuous education for its personnel and their dependants. However, in November 1975, NAF established the department of Education and annexed it under the Directorate of Administration. The department operated until the implementation of the NAF Establishment from 1981–1985 in which the Directorate of Education (DOEDN) was established with effect from 6 June 1984.

The NAF presently has a total of 19 primary schools and 13 secondary schools including the famous Air Force Military School, Jos.

This information is for the general public stating that application for admission into JSS1 of the 12 Air Force Secondary Schools for  Academic Session is now on sale.

The DOEDN also advises on educational aspects of training in the Service and matters of educational organization, establishment and personnel.The Directorate of education specifically performs the following duties:

a.      Maintaining liaison with the Nigerian Army, Nigerian Navy, governmental departments and other external professional/ educational bodies.
b.      Determining the academic and professional potentials of personnel and civilians at the time of their enlistment into the NAF.
c.       Advising on the suitability of personnel for appropriate NAF/Non-NAF Education Sponsorship.
d.      Monitoring the progress of NAF personnel in academic institutions.
e.      Organizing Training Days through the Command Education Officers (CEOs) at Command level and Base Education Officers (BEOs) at the unit level.
f.       Planning and developing the curriculum in NAF training schools.
g.      Providing academic instructors for NAF training institutions like Ground Training Centre (GTC), Air Force Institute of Technology (AFIT) and the Flying Schools.
h.      Contributing staff officers for the Directorate of Manuals, Directorate of Archives and Museum, Directorate of Training and Operation, Directorate of Recruitment, Resettlement and Rehabilitation.
i.        Operating Guidance and Counseling Centers through the BEOs in all NAF units.
j.        Providing Library facilities in units for all ranks.
k.       Supervising and administering all NAF Libraries.
l.        Professionally supervising the Secondary and Primary Schools in the NAF.
m.     Other duties that may be directed by the Chief of Administration (COA) from time to time.

That’s the much we can take on the topic ” Nigerian Air Force Secondary Schools Admission Forms Released”.

JAMB Resources You May Want To Explore

How To Answer JAMB Use Of English Questions In JAMB

How To Check JAMB  Result Online

JAMB Result Checker For Free | How To Check JAMB  Results

How To Score 300 and above in JAMB

JAMB  subject combinations for all COurses

How to create your JAMB profile in 5minutes

Summary of The Last Days At Forcados High School by A.H. Mohammed

Easiest Ways On How To Purchase JAMB  ePin For Registration