Ultimate Guide to Understanding What a Digital Signature is 2021 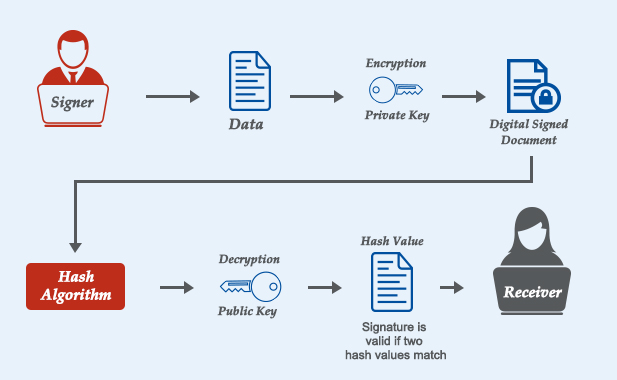 A digital signature is a cryptographic mechanism used to verify the authenticity and integrity of digital data. We may consider it as a digital version of the ordinary handwritten signatures, but with higher levels of complexity and security.

In simple terms, we may describe a digital signature as a code that is attached to a message or document. After generated, the code acts as proof that the message hasn’t been tampered with along its way from sender to receiver.

Although the concept of securing communications using cryptography dates back to ancient times, digital signature schemes became a possible reality in the 1970s – thanks to the development of Public-Key Cryptography (PKC). So, to learn how digital signatures work, we need to first understand the basics of hash functions and public-key cryptography.

Hashing is one of the core elements of a digital signature system. The process of hashing involves transforming data of any size into a fixed-size output. This is done by a special kind of algorithms known as hash functions. The output generated by a hash function is known as a hash value or message digest.

Public-key cryptography, or PKC, refers to a cryptographic system that makes use of a pair of keys: one public key and one private key. The two keys are mathematically related and can be used for both data encryption and digital signatures.

As an encryption tool, PKC is more secure than the more rudimentary methods of symmetric encryption. While older systems rely on the same key to encrypt and decrypt information, PKC allows for data encryption with the public key and data decryption with its corresponding private key.

Other than that, the PKC scheme may also be applied in the generation of digital signatures. In essence, the process consists of hashing a message (or digital data) along with the signer’s private key. Next, the recipient of the message can check if the signature is valid by using the public key provided by the signer.

In some situations, digital signatures may involve encryption, but that isn’t always the case. For instance, the Bitcoin blockchain makes use of PKC and digital signatures, but unlike many tend to believe, there is no encryption in the process. Technically, Bitcoin deploys the so-called Elliptic Curve Digital Signature Algorithm (ECDSA) to authenticate transactions.

In the context of cryptocurrencies, a digital signature system often consists of three basic steps: hashing, signing, and verifying.

The first step is to hash the message or digital data. This is done by submitting the data through a hashing algorithm so that a hash value is generated (i.e., the message digest). As mentioned, the messages can vary significantly in size, but when they are hashed, all their hash values have the same length. This is the most basic property of a hash function.

However, hashing the data is not a must for producing a digital signature because one can use a private key to sign a message that wasn’t hashed at all. But for cryptocurrencies, the data is always hashed because dealing with fixed-length digests facilitates the whole process.

After the information is hashed, the sender of the message needs to sign it. This is the moment where public-key cryptography comes into play. There are several types of digital signature algorithms, each with its own particular mechanism. But essentially, the hashed message will be signed with a private key, and the receiver of the message can then check its validity by using the corresponding public key (provided by the signer).

It’s worth noting that digital signatures are directly related to the content of each message. So unlike handwritten signatures, that tend to be the same regardless of the message, each digitally signed message will have a different digital signature.

Let’s take an example to illustrate the whole process until the final step of verification. Imagine that Alice writes a message to Bob, hashes it, and then combines the hash value with her private key to generate a digital signature. The signature will work as a unique digital fingerprint of that particular message.

When Bob receives the message, he can check the validity of the digital signature by using the public key provided by Alice. This way, Bob can be sure that the signature was created by Alice because only she has the private key that corresponds to that public key (at least that’s what we expect).

So, it’s crucial for Alice to keep her private key in secret. If another person gets their hands on Alice’s private key, they can create digital signatures and pretend to be Alice. In the context of Bitcoin, this means someone could use Alice’s private key to move or spend her Bitcoins without her permission.

Why are digital signatures important?

Digital signatures can be applied to various kinds of digital documents and certificates. As such, they have several applications. Some of the most common use cases include:

The main difference between them is the authentication method. Digital signatures deploy cryptographic systems, such as hash functions, public-key cryptography, and encryption techniques.

Hash functions and public-key cryptography are at the core of digital signature systems, which are now applied to a wide range of use cases. If properly implemented, digital signatures can increase security, ensure integrity, and facilitate the authentication of all kinds of digital data.

In the blockchain realm, digital signatures are used to sign and authorize cryptocurrency transactions. They are particularly important for Bitcoin because the signatures ensure that coins can only be spent by the individuals that possess the corresponding private keys.

Although we’ve been using both electronic and digital signatures for years, there is still a lot of room for growth. A great portion of today’s bureaucracy is still based on paperwork, but we will likely see more adoption of digital signature schemes as we migrate to a more digitalized system.

That’s the much we can take on the topic “Ultimate Guide to Understanding What a Digital Signature is 2021“.