The Fate Of A Human Statue; Fibrodysplasia Ossificans Progressiva

Today, you and I will quickly take a look at the topic “The Fate Of A Human Statue; Fibrodysplasia Ossificans Progressiva“.

This has become necessary as we have sen overtime that several individuals have been searching for topics related to the above topic The Fate Of A Human Statue; Fibrodysplasia Ossificans Progressiva. 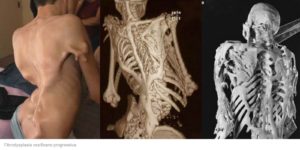 The Fate Of A Human Statue; Fibrodysplasia Ossificans Progressiva It is kinda cool if we have the opportunity to be immortalised in a form of a statue because of some contributions or recognition for certain works that we have done for the benefit of a specific community or for the whole world.

Who wouldn’t want to leave a mark; something for people to remember you by, right? Among others, there lives a small population of people who are tormented by a disease which could literally transform that into a statue.

The pain, the agony and how stiff your muscle are which going to restrict you from moving freely can be quite distasteful.

Fibrodysplasia ossificans progressiva (or FOP) is a disorder which turns your injured skeletal muscles and connective tissues into bones, so frankly speaking, you will slowly turn into a statue and die if you are not managed and treated with utmost cares.

In 2007, there are approximately 800 people, worldwide, who are diagnosed with FOP and all of them are caused by a mutation of a gene called ACVR1.

Most of the BMP receptors can be found on the cell’s surface of the majority of skeletal muscles and connective tissues in the body. It is a vital type of receptor that can be activated by BMP ligands thus initiating a process called ossification.

Ossification process is a biological event that creates bone cells from a specific precursor called osteoblast.

Normally most of the ossification process took place within bones due to certain triggers such as fracture healing, maturation of a child’s bone i.e. from a cartilage to a cartilaginous bone of the cranium etc.; in FOP, however, the formation of bones occurs at an unusual, extraskeletal region.

It’s not unusual for people to get heterotrophic ossification (surgery and trauma) but in FOP every single injury to the skeletal muscle would be replaced by bone tissue.

There are quite a number of BMP receptors that are present on the surface of skeletal muscles but they are rendered inactive by a protein called FKBP12; in a healthy individual, even with a significant concentration of BMP ligands, ossification will never take place.

However, when there is a mutation of the ACVR1 gene, the receptors produced are kinda distorted especially at the binding site of the FKBP12 which wouldn’t allow the protein to properly bind to it and exert its biological effect. This can lead to two possible consequences: The hallmark (though not pathognomonic) of this disease is an abnormally big toe called hallux valgus. It is one of the signs that have been used by clinicians to consider the possibility of patients were having FOP. Unfortunately, identifying diseases, especially a rare one, can be difficult even for an experienced clinician.

FOP is commonly misdiagnosed and unlike any other diseases, subjecting people with FOP to multiple procedures can be harmful even if it is non-invasive. The ossification process often started when there is an injury from a minor or major trauma like dental extraction, biopsy, blood taking, fall or motor vehicle accidents (an extreme example for FOP).

Research into this particular subject is currently halted as it is difficult (or impossible) to conduct studies without hurting patients (blood taking etc.) so developing animal models for FOP is considered a necessity for us to understand and devise a treatment plan for this condition (which is currently still progressing). Early detection can potentially save FOP patients from unintended injuries that could shorten their lifespan by a few years. People with FOP can be diagnosed after birth by the abnormal character (size, orientation) of their great toe which is larger than usual (hallux valgus); that’s the only sign that can be seen on a patient with FOP when they were infants.

However, detecting such abnormality is difficult. As there are only 800 people who are affected by this mutation, we can assume, the majority of doctors around the world are quite not familiar with the parameter of an abnormal toe

Most of FOP patients are diagnosed during the first decade of their life. Children, they run and they fall and suddenly they felt something unusual at the injury site. Some heterotrophic ossification even triggered during immunizations.

Previously, before we knew so much about FOP, surgical resection of the heterotrophic bone would be performed in order to maintain normal skeletal framework.

Unfortunately, all of them lead to an explosive new bone formation which is painful and worsened the stiffness. There is no pharmacological or surgical treatment modality that can be used to alleviate the progression of symptoms for patients with FOP, so naturally, they are treated conservatively.

Although the disorder seems to affect skeletal muscles, there are some which are spared from being converted into bone tissues which are tongue, diaphragm and extra-ocular muscles. Research to find treatment for FOP has yielded great results but most of them are tested on animal models. If by chance, they work in humans as intended, the progression of FOP can be delayed or stopped.

The only way we can achieve that physiological benefit is to create a pharmacological agent which is able to block the signal produced by the mutated BMP receptor.

In 2015, a study conducted by Hatsell et al found that a protein called activin A which normally inhibit BMP receptor produced a stimulating effect on the mutated BPM receptor which would encourage heterotrophic ossification.

After working with a couple of mice, it was found that any genetically-modified mouse who received activin A antibody doesn’t develop any heterotrophic ossification despite injuries. The result is quite promising and might be one of the most significant steps towards developing drugs which can be used to treat FOP.

One of the drugs, called Palovarotene, developed to treat FOP is currently doing well in phase 2 of clinical trials.

The concept is different from what has been entailed by Hatsell, this drug was developed based on the study conducted by Chakkalakal et al. in 2016.

In that study, the key step is to prevent the formation of cartilage that can be remodelled into bones by blocking the secondary messenger in the BMP pathway; no cartilage, no bone.

If someday this drug is considered safe and effective, FOP will be no longer untreatable. Science evolved every day and who knows what tomorrow might have brought you.

That’s the much we can take on the topic “The Fate Of A Human Statue; Fibrodysplasia Ossificans Progressiva”.