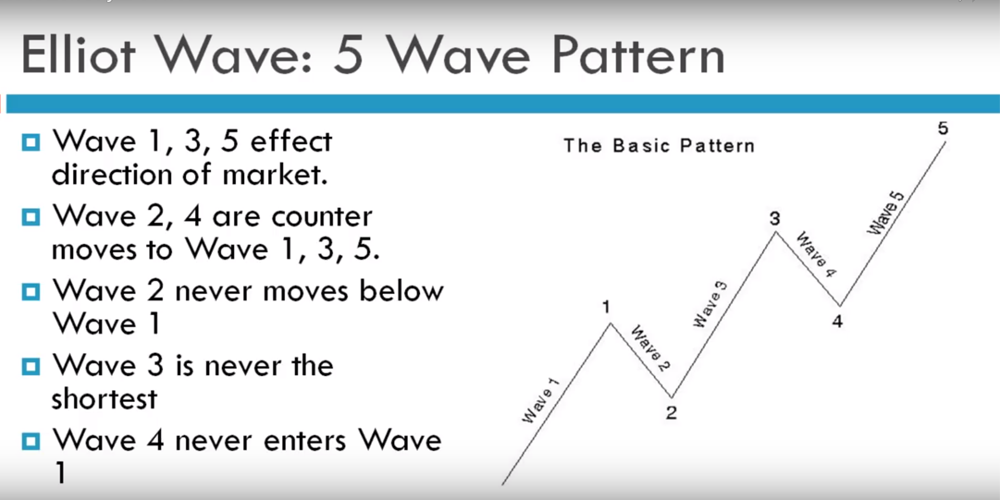 Looking for the best article to read on Elliot Wave Theory?, then “Ultimate Guide to Understanding the Elliott Wave Theory 2021”.is for you

The Elliott Wave refers to a theory (or principle) that investors and traders may adopt in technical analysis. The principle is based on the idea that financial markets tend to follow specific patterns, regardless of the timeframe.

Essentially, the Elliott Wave Theory (EWT) suggests that market movements follow a natural sequence of crowd psychology cycles. Patterns are created according to current market sentiment, which alternates between bearish and bullish.

The Elliott Wave principle was created in the ’30s by Ralph Nelson Elliott – an American accountant and author. However, the theory only rose in popularity in the ’70s, thanks to the efforts of Robert R. Prechter and A. J. Frost.

Initially, the EWT was called the Wave Principle, which is a description of human behavior. Elliott’s creation was based on his extensive study of market data, with a focus on stock markets. His systematic research included at least 75 years’ worth of information.

As a technical analysis tool, the EWT is now used in an attempt to identify market cycles and trends, and it can be applied across a range of financial markets. However, the Elliott Wave is not an indicator or trading technique. Instead, it is a theory that may help to predict market behavior. As Prechter states in his book:

[…] the Wave Principle is not primarily a forecasting tool; it is a detailed description of how markets behave.

Note that, in the first example, we have five Motive Waves: three in the upward move (1, 3, and 5), plus two in the downward move (A and C). Simply put, any move that is in accordance with the major trend may be considered a Motive Wave. This means that 2, 4, and B are the three Corrective Waves.

But according to Elliott, financial markets create patterns of a fractal nature. So, if we zoom out to longer timeframes, the movement from 1 to 5 can also be considered a single Motive Wave (i), while the A-B-C move may represent a single Corrective Wave (ii).

Also, if we zoom in to lower timeframes, a single Motive Wave (such as 3) can be further divided into five smaller waves, as illustrated in the next section.

As defined by Prechter, Motive Waves always move in the same direction as the bigger trend.

As we’ve just seen, Elliott described two types of wave development: Motive and Corrective Waves. The previous example involved five Motive and three Corrective Waves. But, if we zoom in to a single Motive Wave, it will consist of a smaller five-wave structure. Elliott called it the Five-Wave Pattern, and he created three rules to describe its formation:

When compared to Motive Waves, Corrective Waves tend to be smaller because they move against the bigger trend. In some cases, such a counter-trend struggle can also make Corrective Waves much harder to identify as they can vary significantly in length and complexity.

According to Prechter, the most important rule to keep in mind regarding Corrective Waves is that they are never made of five waves.

There is an ongoing debate regarding the efficiency of the Elliott waves. Some say that the success rate of the Elliott Wave principle is heavily dependent on the traders’ ability to precisely divide the market movements into trends and corrections.

In practice, the waves may be drawn in several ways, without necessarily breaking Elliot’s rules. This means that drawing the waves correctly is far from a simple task. Not only because it requires practice, but also due to the high level of subjectivity involved.

Accordingly, critics argue that the Elliott Wave Theory isn’t a legitimate theory due to its highly subjective nature, and relies on a loosely defined set of rules. Still, there are thousands of successful investors and traders that have managed to apply Elliott’s principles in a profitable manner.

Interestingly, there is a growing number of traders combining the Elliott Wave Theory with technical indicators to increase their success rate and reduce risks. The Fibonacci Retracement and the Fibonacci Extension indicators are perhaps the most popular examples.

According to Prechter, Elliott never really speculated on why markets tend to present a 5-3 wave structure. Instead, he simply analyzed the market data and came to this conclusion. Elliott’s principle is simply a result of the inevitable market cycles created by human nature and crowd psychology.

As mentioned, however, the Elliott Wave is not a TA indicator, but a theory. As such, there is no right way to use it, and it is inherently subjective. Accurately predicting market moves with the EWT requires practice and skills because traders need to figure out how to draw the wave counts. This means that its use can be risky – especially for beginners.

That’s the much we can take on the topic “Ultimate Guide to Understanding the Elliott Wave Theory 2021“.