Today, you and I will quickly take a look at the topic “A Bike’s Stability Is Not As Easy As It Looks | How A Bicycle Stays Upright”.

This has become necessary as we have sen overtime that several individuals have been searching for topics related to the above topic A Bike’s Stability Is Not As Easy As It Looks | How A Bicycle Stays Upright. 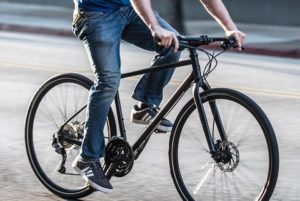 After one or two falls we finally master the art of riding bicycles and often can’t wait for the next school day to display our skill of riding to our friends.

Riding a bicycle is easy, but have we ever paused long enough to understand how a bicycle achieves its stability and upright stay with little assistance from the rider? It is a feat that the bicycle achieved for more than two centuries now.

A hilarious scene in the 1949 French comedy Jour de fête, The Big Day in English, shows the lead actor Jacques Tati who played the role of an inept mailman chase his bicycle downhill with the bike remaining upright with no rider on it.

You can watch the clip of the funny scene on youtube here.

The self-stabilisation in a bicycle is nothing short of a physics wonder.

The idea that a two-wheel device is capable of being stable or even adjusting the stability so as to balance and even to do so with no one on it is almost akin to a magic.

Well, the brilliant author and futurist, Mr Arthur C Clark, famously said that an advanced technology blurs the line between reality and magic. The bicycle though simple, had come a long way. From the 1860s Boneshaker, due to both the body and tire made of iron which makes for a bone-jarring feel when you ride one, to the modern bicycle we have today.

You will agree that that technology had sufficiently advanced and evolved with time.

There is some hypothesis as to the reason a bicycle can remain upright. One of such is the gyroscopic effect.

A gyroscope is a metal wheel that is fixed on an axle, the wheel and axle combo is secured on a metal frame which allows the wheel to rotate freely when pushed.

Any attempt to stand the gyroscope on its end when the wheel is stationary will remain unsuccessfully as it will keel over. But a wonder comes to light if you spin the wheel and stand it, and just as the gif shows, it will freely stand and rotate.

It will continue to rotate and will even resist any change in its orientation as long as it spins.

If you are to lift up one end of a gyroscope by a thread, the other end will appear to hold steady as if held by an invisible hand.

The rapid spinning bicycle wheel, or most wheel rotating around an axle, behaves like a gyroscope.

There is angular momentum in a rotating bicycle wheel, an inherent characteristic of the rotational speed and the mass distribution of the bicycle which includes the mass of the wheel.

If you look at various bicycle design, you will realise that there is the concentration of mass around the wheel’s rim. This design is to give an added angular momentum at any specific speed.

The gyroscope ability to remain in its position makes it an excellent tool as a navigation tool in aircraft and in space-exploring vehicles. In simple terms, this gyroscopic effect on a bicycle wheel ensures that a spinning wheel stays spinning and remain positioned to their spin axes.

The school of thought who believes that it is the gyroscopic effect that keeps the bicycle from keeling over did miss a couple of things.

While the effects may work for the motorcyclists with their heavy, fast-spinning wheels, the grandfather taking his bicycle for an evening stroll may experience very little of such an effect as the wheels may not spin as fast and the bicycle wheels are also very light in weight.

If you also check how many bruises you acquired when learning how to ride a bicycle, you will realise that left for the gyroscopic effect, all you need is to push the bike and jump and be on your merry way. The second long-held belief as to the reason we have an upright bicycle is the castor or caster effect.

It is expressed in degrees and shows the angular displacement which is present between the vertical axis of the wheel (denoted by the grey perpendicular line) and the steering axis which is shown in the red dotted line. If the front of the bicycle is on the left side of the image, this is a positive caster angle.

The castor effect helps for self-aligning or reorientation that occurs when you drag the grocery cart around a corner ina supermart.

Notice how the wheel follows the change in direction by reorienting to the new motion.

On a bicycle, this allows the wheel to always align under a rider even there is a change in direction.

But bicycle dynamic expert like Arend L. Schwab of the Delft University of Technology in the Netherlands has so far stated that those two phenomena are not what a bicycle needs to be self-stable.

The researchers published a science paper titled A Bicycle Can Be Self-Stable Without Gyroscopic or Caster Effects in 2011.

The paper demonstrates that the two effects are not necessary to bike’s stability as they designed a riderless bike that lacks both attributes that can steer itself and even auto-corrects itself from a nudge while in motion.

In their research they found that other various design parameters such s the mass distribution, the axis in steer tilt all affect the stability in complex ways.

It is still a work in progress to ascertain other things that will help increase the rider’s safety. The majority of fatalities/accidents in cycling occurs when a rider loses stability and not necessarily when they run into objects.

That’s the much we can take on the topic “A Bike’s Stability Is Not As Easy As It Looks | How A Bicycle Stays Upright”.