Today, you and I will quickly take a look at the topic “The Internal Combustion Engine ; Its Parts & Working Principles”.

This has become necessary as we have sen overtime that several individuals have been searching for topics related to the above topic The Internal Combustion Engine ; Its Parts & Working Principles 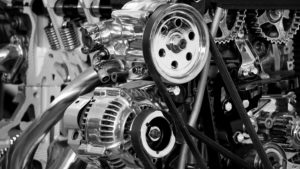 This post is basically about internal combustion engine(I.C.E) and the major parts of the I.C.E, hence illustrating the processes involved in a combustion cycle and the engine stroke, it may seems very difficult to comprehend but the post would be in its simpliest state.

In engineering an I.C.E is simply a heat engine that convert initial chemical energy to heat energy which is then spontaneously converted to useful mechanical energy.

In this case it runs on a thermodynamic cycle which is determined by the design of the engine but hence the conventional cycle for an I.C.E is an otto cycle which was introduce by Nikolaus Otto.

Basic concept about a thermodynamic cycle

Explaining a thermodynamic cycle might be incomprehensible for individual not in the field of engineering so. Lets take a simple concept say the process of heat ice and cooling in a closed and defined environment.

COMMON PARTS OF AN I.C.E

This can be explained in a simple way as a shaft consisting of multiple cranks fixed to it depending on the number of cylinders.

This serves as the heart of the engine and is meticulously designed based on the configuration, and number of cylinders in the I.C.E. The main function is to convert all neccessary energy to useful mechanical work.

Hence it transfers the work output of an I.C.E. to any other machine were the work is need, it is usually a gearbox in automobile or an alternator in a generator plant.

Its working principal is rotation as the piston and connecting rod reciprocate. That is to say it converts reciprocating motion to rotational motion. A camshaft is simply a shaft which that have multiple cam fixed to it depending on the configuration of the valves or the number of valves which serves as the follower, the mechanism at which the cam shaft operates is called the cam and follower mechanism.

It is normally located at the top of the engine or the cylinder head and works simultaneously with the tarpets or the push rods which controls the valves and is essential for the timings system. An engine can either have a push rod and rocker arm or a tarpet hence modern I.C.E uses the tarpets due to its spontaneity in action and tend not to miss its timing.

The main function of a push rod and rocker arm is that the roller ball bearing at the lower end of the push rod mobes on the lobes of the camshaft.

The upper ball seats into a recessed cup on the underside of a rocker arm.

As the offset lobe of the cam contacts the lower ball, the push rod is forced up and lifts the rocker arm.

Meanwhile the tarpets simply combines the function of the push rod and rocker arm to a more simple and confined manner. Hence they all controls the engine valve. An I.C.E have two types of valves which are inlet and outlet and functions as the name implies, most times for some complicated design like the 16 valves turbo charged design, it has four valves each to each cylinder, meanwhile this valves is shared amongst its types that is 2 – inlet and 2 – outlet.

This is done generally to maximize the efficiency of the engine obtain more speed. More other complicated design are also available example is the V-tech engine. The Piston And Connecting Rod

The piston and connecting rod works simultaneously together and are connected, they serves as the lungs of the engine. In the piston the piston rings is located which will be discussed briefly later.

The main function of the piston is to convert the spontaneous heat energy to useful mechanical energy on different strokes this energy is immediately transferred to the connecting rod which then drives the crank shaft. Its is usually made of iron but modern ones are made of aluminum to reduce weight.

It houses all part of the engine and it most essential parts like the combustion cylinder and also hold the crankshaft still while it rotates and the piston reciprocate. It houses the valves, push rods and rocker arm and also the tarpets. It major fuction is to house the system of inlet and outlet valves while it attach to the top of the engine block. WORKING PRINCIPLE OF AN I.C.E

In mechanical engineering under the field of mechanics of machines, a system called A SLIDER CRANK MECHANISM is the overall principle behind the I.C.E.

Hence in I.C.E, the working principal or rather the engine is sometimes chracterised by the stroke.

meanwhile a stroke is basically the movement of the piston from the top dead centre(TDC) to the lower dead centre(LDC) or vise versa.

Basically there are two types of engines based on number of strokes;

•two stroke engine: the crank rotate once for complete cycle.

▪The intake stroke: At this point the piston already in the TDC, the inlet valve in the top cylinder head opens the fuel/air mixture enters the combustion chamber while the piston moves to the LDC. ▪The compression stroke: immediately after the intake stroke, at this point the piston is already at the LDC, both valves are closed and the piston moves toward the TDC while compressing the air/fuel mixture to a pressure of 15 bar. ▪The power stroke: the piston already at the TDC and both valves are still closed while the air/fuel mixture is compressed, the compressed gas is ignited using a spark plug and the gas explodes in the combustion chamber pushing the piston from the TDC to the LDC and thus producing a massive torque which drives the crank more than other stroke and its the most important stroke of all. ▪The exhaust stroke: after the power stroke the piston will be at the LDC with the carbon gas as waste product still occupying the combustion chamber.

In this stroke the piston moves towards the TDC and the exhaust valve is open while the waste carbon gas is passed out through the waste manifold. All these strokes are repeatedly continuous provided the fuel keeps supplying and the engine working in a perfect condition. This process is a cumbersome process and it entails the basic understanding of engineering thermodynamics before one can comprehend an otto cycle.

The otto cycle is simply the thermodynamic way to explain what goes on in the I.C.E that give rise to the conversion of chemical energy to heat and then spontaneously to useful mechanical energy. the processes are briefly explained below:▪operation 1-2: air/fuel mixture moves into the combustion chamber at constant pressure. and the piston moves from the TDC to the LDC in this operatuon.

▪operation 2-3: the process nvolves the compression of air/fuel mixture while the piston moves from the LDC to TDC. Meanwhile this process is an isentropic process also called adiabatic process. In isentropic process the entropy is constant and entropy is defined as the degree of disorderliness in the system. so therefore the randomness of gas molecule in this operation is constant.

▪operation 4-5: It is a adiabatic process that occurs immediately after the constant volume heat transfer and its simply known as the power stroke.

▪operation 5-6: it involves the rejection of heat while the piston is at the LDC and is a constant volume process.

▪operation 6-7: this process occur while the piston moves from the LDC to the TDC, it involves the release of air into the atmosphere and its a constant pressure process also known as isobaric process.

Most people or rather individuals usually ask this if there is oil in the I.C.E, does it burn?, what prevent it from burning?, how does fuel combust whilst the engine oil is present?.

These are question most people ask or think of when they encounter an I.C.E, The answer to this question is the function of engine piston rings and valve stem seal. The engine piston rings prevent the engine oil from getting into the combustion cylinder through the piston meanwhile maintaining the piston compression in the neccessary strokes.

While the valve stem seal prevents the engine oil from getting into the combustion cylinder through the valve, it also maintain engine’s compression pressure.

It is noticed that these to parts are located in the dynamic parts closed to the combustion chamber or cylinder, their main function is to prevent oil from contaminating the atomized fuel.

More over if these components fails, the oil daily guage starts to drop up to the extent that the cylinder now combust oil/fuel mixture and of which engine oil burns slow thus causing an in complete combustion, these results to engine smoking.

Parts Of A Engine Piston Ring

these parts of piston ring are mainly found in heavy duty engines or moderate multi cylinder engine four stroke engine. meanwhile the oil rings and wiper rings are usually not present in two stroke engine due to the fact that oil are usually to present as a reservoir in the engine but rather it is mixed with the fuel in calculated amount and lubricates the component as it burns and stored some oil with the aid of scavenging process

the piston ring parts are briefly explained as follows;

•Compression ring: It is located at the upper groove of the piston and the closed to the open space in the combustion chamber, it is usually thicker than other ring parts and serves as the major ring components in that it maintain all stroke pressure to the piston and minimize pressure loss.

•Wiper ring: It is located in groove between the compression ring and the oil ring. The wiper ring is used to further seal the combustion chamber and to wipe the cylinder wall clean of excess oil, since the four stroke I.C.E uses a reservoir of oil and oil are contained in the face of the piston facing the crankcase excessive oil are splashed during working process then the wiper ring helps to clean off the oil off the cylinder wall, it also helps in maintaining the compression pressure in the piston.

•Oil ring: it is located in the last groove closest to the crank case it is usually of three pieces and it main function is to wipe excess oil from the cylinder wall during piston movement.

Excess oil is returned through ring openings to the oil reservoir in the engine block. the oil ring is a peripheral part of piston ring in that it does not maintain or rather it presence is inconsequential to compression pressure hence it is the least essential. The internal combustion engine have quite evolve these recent years in that more features like the GDI (Gasoline Direct Injection) which has a direct injection of air/fuel mixture to the combustion chamber. f

Feature like the V-Tech timing system, turbo chargers amd super charges. and also more cylinder engines like the V-6 engine, V-8 engine and so on. This post was brought to its minimum simplicity in order to bring comprehensive understanding to its reader.

That’s the much we can take on the topic “The Internal Combustion Engine ; Its Parts & Working Principles”.