Today, you and I will quickly take a look at the topic “Elevated Carbon dioxide Level And Plant Productivity | Effect Of CO2 On Plant Growth“.

This has become necessary as we have sen overtime that several individuals have been searching for topics related to the above topic Elevated Carbon dioxide Level And Plant Productivity | Effect Of CO2 On Plant Growth. 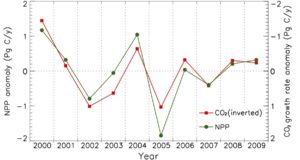 Carbon dioxide happens to be an important component in the nutrition of photosynthetic organisms.

Inorganic carbon in the form of carbon dioxide combines with water molecules to produce a carbohydrate from which other secondary products such as starch are formed.

The process of photosynthesis is impossible without the presence of chlorophyll which absorbs solar radiation that catalyses the splitting of water molecules and the eventual release of the electrons that will drive the remaining process.

The entire process is summarized in an equation thus;

There are two phases of reaction that add up to give the equation of photosynthesis.

In the light reaction, water molecule is spliced to release oxygen, adenosine triphosphate (ATP) is synthesized in a chemiosmotic process and finally, nicotinamide adenosine dinucleotide phosphate (NADPH) which functions as an electron carrier is generated.

Both ATP and NADPH synthesized in the light reaction are utilized in the second phase, the dark reaction.

This is the phase during which carbon dioxide is utilized in the synthesis of carbohydrate as shown by the above equation. Another biological reaction in which carbon dioxide plays an important role is respiration.

During this process, organic compounds (synthesized from photosynthesis) are broken down in order to unlock the energy present in them.

Carbon dioxide and water are produced as a result, in addition to the energy in form of adenosine triphosphate. Thus;

Interestingly, the equation of photosynthesis seems to be a reversal of that of respiration.

Both reactions are part of the important processes that sustain life, although photosynthesis is limited to the organisms belonging to the plant kingdom while respiration takes place in all living organisms.

Photosynthesis involves the conversion of solar energy from the sun to chemical energy which is usually locked up in the organic product. Respiration, on the other hand, has to do with the breaking down of organic products and the release of energy within them.

For a plant to survive and continue growing and developing, the rate of producing food must exceed the rate of breaking down food. Both photosynthesis and respiration go on simultaneously in the plant.

The difference in the rate of the two reactions is referred to as net productivity/photosynthesis. Hence, plants must have positive net productivity in order to continue living.

The two processes, however, are incomplete without carbon dioxide being an important reactant/product.

Over the years and since the ushering in of the era of industrial revolution, the concentration of carbon dioxide in the atmosphere has increased tremendously from as low as 280 ppm in pre-industrial era, to 403 ppm as at years 2016 and 408 ppm as at July, 2018 (although this has been disputed in some corners).

According to International Protocols on Climate Change, the atmospheric concentration of CO2 keeps surging at the rate of 1.8 ppm yearly.

The reason for this surge in concentration is not far-fetched and has been comprehensively discussed in various scientific quarters and articles. One would ordinarily expect that a surge in the atmospheric level of carbon dioxide is supposed to cause an increase in the rate of photosynthesis and perhaps a decrease in respiration rate due to the internal partial pressure of the gas in the body of the plant.

In fact, several scientific investigations have reported an increase in plant’s productivity as a result of artificial elevation of CO2 in the ambient air. In 2016, Lamani et al. reported a direct positive correlation between elevated CO2 and photosynthetic rate in Santalum album, a plant species rich in heartwood and essential oil.

In a similar experiment conducted by some Japanese researchers in 2017, Chinese yam and rice were found to have higher productivities with elevated CO2 levels, although the effect was more pronounced in yam than in rice.

On the other hand, respiration rates was found to be hindered with elevated level of the gas in soy bean cultivars. However, the later event has been a major source of controversy among scientists.

The reports on Santalum album, Chinese yam and rice only acknowledged CO2 as the sole determiner of the rate of photosynthesis/productivity.

This might not be entirely true in that both water and CO2 (along with some other biotic factors) play important role as the reactants in the biochemical process.

This question was somehow illuminated on by some Chinese researchers in 2014 where they reported that only interactive effects of an elevated CO2 level and water could bring about an increase in productivity in maize.

However, the situation might not be as simple as to follow Le Chatelier’s principle or some reaction laws.

Carbondioxide needed for photosynthesis enters primarily through the stomata, diffuses through the intercellular air spaces within the leaf and eventually find its way down to the reaction center (dark reaction of photosynthesis).

The stomata regulate the absorption and release of carbon dioxide as well as loss of water (evapotranspiration) from the leaf surfaces. The number of stomata present per unit area of leaf (stomata density) has been known to vary among different species, genus, families, orders, class and different plant divisions.

Furthermore, the density has also been reported to vary along with several environmental factors such as sunlight, atmospheric temperature, humidity etc.

The relative importance of carbon dioxide to climate scientists has led to a special interest in the response of stomatal density to changes in the atmospheric concentration of the gas.

Several experiments have been conducted and reports have emerged linking the atmospheric concentration of carbon dioxide to the number of stomata on the leaf surface.

Although this is purely on species to species basis, the correlation established between the stomatal index and the atmospheric concentration of the gas is being used to estimate the geologic concentration of carbon dioxide through the studies of related plant species.

It has been established that the stomatal density on leaf surfaces decreases in response to elevated carbon dioxide level in the short term, meaning that plants naturally have a way of limiting the amount of carbon dioxide in their systems irrespective of the concentration of the gas in the ambient air.

If this were to be true, what mechanism leads to increased photosynthesis as a result of increased concentration of carbon dioxide? Your contributions would be highly appreciated.

That’s the much we can take on the topic “Elevated Carbon dioxide Level And Plant Productivity | Effect Of CO2 On Plant Growth“.