Have you been eagerly anticipating “The Utopia Spelling Bee 2020 National Competition?”, then your wait is over.

With Zero Registration fee, you get a chance to become a millionaire by just showing your ability to spell words correctly. 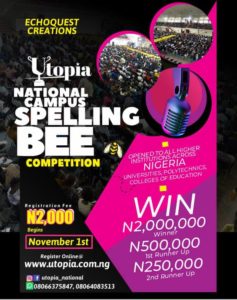 Below is a comprehensive guide on the 2020 Utopia spelling Bee competition. 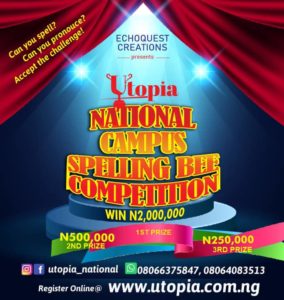 Our speeling bee is an indoor game that plays on sound and sense, the pronunciation and the meaning of words. The game master known as the Bee Master pronounces a word and states a brief meaning of the word while you as a bee player or contestant listen and spell the word in the presence of a panel of judges and a large audience.

The challenge is to display your word power and extensive vocabulary simply by  spelling your way through both simple and difficult words up to the grand finale to win our star prize and become our Bee champion!.

The purpose of the Bee is to help pre-expose students to advanced vocabulary that will be useful for effective learning of the different academic subjects that they will encounter in the course of their higher studies.

To put into force a Nigerian culture in which the scholarly talent is also a celebrity. 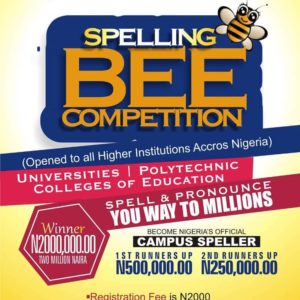 If you emerge as the winner of the Bee, you will be declared the Bee Champion and you will be awarded onstage a cash prize of two million naira (N2,000 000) only. .

If you emerge as the first runner-up, you will be awarded onstage a cash prize of seven hundred and fifty thousand Naira (N750,000.00) only.

If you emerge as the second runner-up, you will be awarded onstage a cash prize of two hundred and fifty thousand naira (N250,000.00) only.

All contestants will be entitled to two entry tickets to attend the Grand finale, which will be held at the University Of Benin in Benin City on February 9th 2019. Contestants are to arrive Benin on the 8th of February.

However, Utopia Bee will be responsible for their transportation within the city upon arrival as well hotel accomodation. 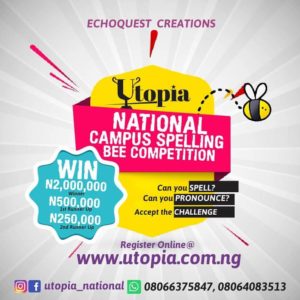 All Students at colleges, polytechnics and universities in Nigeria are eligible to register to compete for the prizes. Graduates and postgraduate students are also welcomed to try.

The contestant must not have any relative (siblings, cousins, nephews, nieces, parents, uncles, aunties) who are current staff of the Utopia Bee Company (echoquest creations).

Contestants are required to upload a recent passport photograph during the online registration.

Contestants are required to print the e-registration confirmation page for entry at finals.

Volume 1 contains five thousand (5000) words which advanced students are likely to encounter or are likely to have encountered in the course of their higher studies. 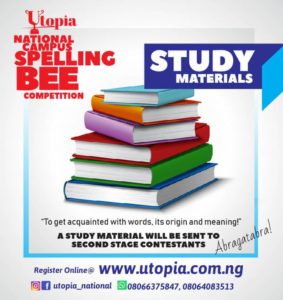 The words can’t be said to be difficult for the advanced learner. They are just words that an advcanced learner ought to be familiar with.

All of the 5000 words are English words except that some of them have become so familiar in English that even many native users of English, the British and the Americans have forgotten that the words have foreign origins in Latin, French or German such as auditorium, entreprenuer or bildungsroman respectively.

Volume 2 also contains 5000 words out of which two thousand of them are English and which we categorize as difficult owing to their spellings and pronouncitations. 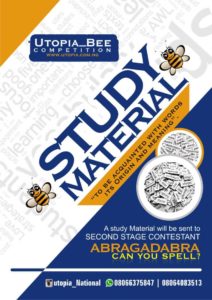 The remaining three thousand in Volume 2 are foreign words of French, German and Latin each of which has a thousand words.

In both Volume 1 & 2, a brief meaning of every word is given. All the words you will encounter at the prelims will be taken from the two volumes which together contain 10,000 words. 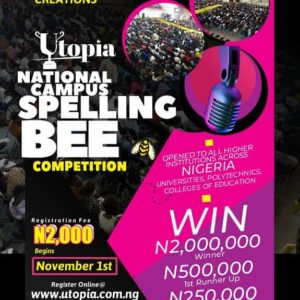 There shall be 3 rounds at the preliminaries. These round of the prelims shall take place online starting November 1st, 2018 to February 5th 2019, within these period, the portal will have auto graduale contestants fromstage to stage through to the finals.

At least (50) contestants will qualify to the grand finale which shall be held at the university of bein Main auditorium on Saturday February 9th, 2019.

There shall be no more than Seven (7) rounds at the Grand Finale.

In every round of the grand finaly, a contestant qualifies for the next round if he/she spells a word correctly on stage at the microphone within 60 seconds.

A contestant is eliminated if he/she gives a wrong spelling or if /she fails to spell his/her given word within 60 seconds.

The Bee champion may emerge in any of the rounds from the 1st to the 7th round.

This can happen only if one of the spellers spells his choice word correctly in addition to the next word that has not been spelt in the Bee Masters list.

If there is no winner after the 7th round, the judges will announce the total points earned by each finalist through the three (3) rounds of the preliminaries and the seven (7) rounds of the Grand Finale. Then a tie breaker of seven words will be served to all the finalists in this round to spell in writing.

The speller with highest number of points derived from all the rounds and the tie breaker test emerges as the champion.

If the spellers in the places of the 1st and/or 2nd Runners-up are two or more, they shall be declared Co-Runners-Up.

Every contestant is given 60 seconds to give the correct spelling of a word to be pronounced by the Bee Master, or the the Associate. Once the Bee Master pronounces the word after stating its meaning and its origin, spelling time starts counting down.

The contestant may request the pronouncer to repeat the pronounciation of the word, repeat its meaning or its origin. During this time, spelling times keeps counting down.

If the Pronouncer obliges with permission from the judges, time allowed continues to count down.

The Bee Master lists is a list of 700 words from which the pronouncer will give a word to the spellers at Grand Finale. Whole the Utopia Bee word List  2019 and Oxford advanced Learners Dictionary are the primary sources of the words in this list. Merriam Webster Unabridged Dictionary is fianl authority and ultimate source of words.

The Bee list is available only to the Bee Master and it is issued to the spellers only at the end of quiz. Only the Bee Master has prior knolwedge of the words in the list before the time of the finals.

Role Of The Bee Master

Role Of The Contestant

The Contestant is required to stand at the Microphone on stage and face the judges and the Bee Master. The contestant then clearly utters every letter of his/her chosen word while spelling it.

If a contestant fails to spell the word correctly, the word is given as a bonus to the next contestant to spell. A contestant is not allowed to change the sequence of letters already uttered when retracing a spelling.

The Panel Of Judges

The Panel of Judges is a panel of three members one of which is an expert in english or Linguistics. The judges monitor the event procedures to ensure that the rules are not violated.

They listen carefully to both the Bee master and the spellers and determine whether or not a word has been correctly pronounced and spelt.

In any case of misunderstanding by a speller, they alone determine whether the pronouncer has given sufficient information on the word or not. The judges decisions are final. 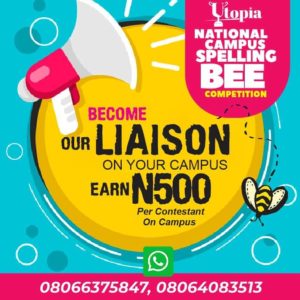 I hope you’ve got what it takes to be “The Utopia Spelling Bee 2019 National Competition Champion”!!.

Thanks For Coming Around

If you have any questions, do not hesitate to drop them in the comment section and we will reply almost immediately.